Is the light throat a distinctive feature of Plethodon teyahalee ? Jon wanted to make this little of-trail trek to see of there might be  Plethodon jordani  on Turkey Knob (Great Smoky Mountains, north of the Lower Cammerer Trail near Groundhog Ridge). Turns out it's too low, but we got a great series of slimy salamanders. The "hike" was about 3/4 of a mile and 1200 feet of elevation gain. It took about three hours. As always when attempting to identify slimy salamanders in the smokies, the question is how to distinguish  Plethodon glutinosus  from  P. teyahalee  (if, indeed such a distinction exists ... research will be forthcoming over the next few years). Several texts mention a light chin (or throat?) as a characteristic of P. teyahalee . I have seen chins similar to the top photograph in places (northeast Tennessee) where the only species is supposed to be  P. cylindraceus , so it's not globally diagnostic. But on this day in the smokies we saw both light chins
Post a Comment
Read more 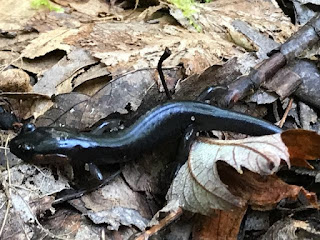